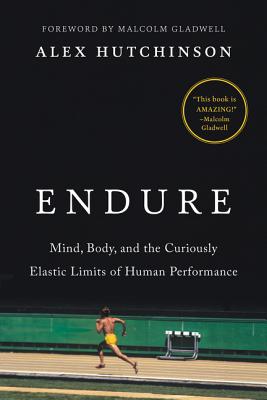 Ever wondered why you find yourself able to sprint the last hundred meters of a 5k race, when you spent most of the third mile feeling like you couldn’t possibly take one more step? Or why crowd support makes you run better? Or why people tend to collapse after they cross the finish line of a marathon, rather than before?

Alex Hutchinson, columnist for Outside and Runner’s World, tackles these questions and more in his new book, Endure: Mind, Body, and the Curiously Elastic Limits of Human Performance. Hutchinson organizes his research into the limits of human performance into three buckets: Mind & Muscle (with chapters on how the brain interacts with our muscle capacity), Limits (pain, muscles, oxygen, heat, thirst, and fuel), and Limit Breakers (the science of training the brain to go beyond what we think we can do).

Many of the conclusions in Endure will jive with what you’ve often heard about running performance and endurance: smiling can make you run faster; high-intensity training workouts can, when done in moderation, increase your endurance; the type of fuel you eat before, during, and after an effort can greatly impact performance. But that’s not to suggest that Hutchinson’s book is boring—quite the opposite, in fact. By striking the perfect balance between anecdote and research, Endure offers runners—or, indeed, any endurance athlete—insights into the physics and physiology of high-stress physical activity, be it sprinting a 5k for a new PR or pushing the limits of endurance at a multi-day ultramarathon event.

Hutchinson is a runner himself, so it is unsurprising that many of the stories in Endure are running-centric, including a detailed analysis of Nike’s infamous Breaking2 attempt. But, as Malcolm Gladwell notes in the introduction to the book, “[T]his is not a running book.” It is a book that explores the human body’s relationship to pain and discomfort, to sheer force of will, to belief in our own potential.

So what are you waiting for? Endure is available at the Curious Iguana in downtown Frederick, or wherever books are sold. Get yours today, and start thinking about how endurance will play a role in your 2018 race plans.

Note: The Curious Iguana will give 20% off this title if you mention “Steeplechasers” at checkout.