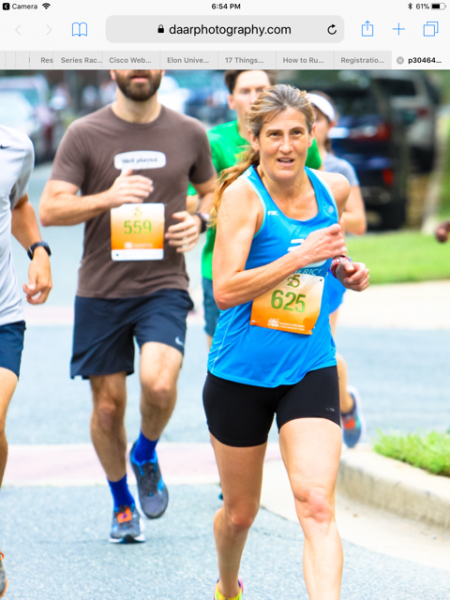 Who hasn’t ever dreamed of competing at the Olympic Games? Having reached the milestone birthday of 50 this year, I knew that my Olympic dream was well beyond me. Or so I thought. Then I realized the Senior Olympics, also known as the National Senior Games, may be an opportunity both for myself and my partner, Art Gregory. Now you may think 50 is too young for the senior Olympics but much like AARP is now 50+, the National Senior Games is also geared for all athletes 50+. 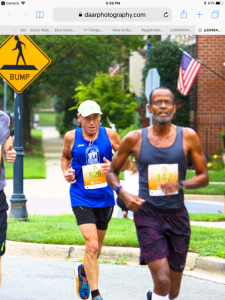 Fast forward to race day at Kentlands on September 1. It was another typical hot, steamy late summer day. It was a large 5k for the area—almost 900 runners total (all ages) with many older runners coming out for MD qualifying event. We saw many impressive runners—even over the age of 80, including 87-year olds Jack McMahon (37:17) and Yvonne Aasen. The course was “rolling hills” with many twists and turns in the Kentlands neighborhood. In the end, Art qualified with an impressive 24:46—over four minutes under the national standard and I qualified in 22:24—over two minutes under the qualifying standard. We were both the top finisher for our age group as well. For our effort, we got Maryland Senior Games gold medals and automatic entry to the National Senior Games. Fellow Steeps member and prolific racer, John Way, also qualified by being a top three age group finisher. All and all, a good accomplishment for all of us that day!

Now Art and I have our sights on the qualifying race for the 10k later this month! And further in the future, our race day(s) in Albuquerque! Better start the elevation training soon, Albuquerque is at 5,300 feet. But first, Baltimore awaits us.