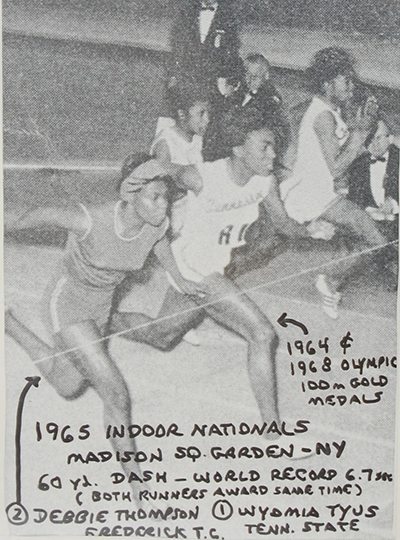 “I couldn’t imagine, Frederick was little, Frederick having such a major meet. It showed the importance and how much the track community trusted this man.” – Stan Goldberg, long-time Sports Editor of the Frederick News-Post.

The year was 1972 and Governor Thomas Johnson High School was hosting the U.S. Olympic Team selection trials to determine which women would represent the United States at the Games of Munich. The fact that Frederick and a six-lane high school track were chosen to host the Olympic Trials was most likely a showing of ambivalence from the Amateur Athletic Union to women’s running. (The AAU was then the Olympic governing body of all running sports.)

However, it was not the first time Frederick was host to a major running event for women. Jack Griffin was moving aggressively into that void.  In 1968, Frederick was the site of the Women’s National Cross-Country Championships and in 1970 the VFW Golf Course was the scene of the one of the first Women’s World Cross Country Championships, contested by 34 women from seven nations. (A competing event was held the day before in Vichy, France).[1]Both cross country races in Frederick were won by the legendary Doris Brown-Heritage. The 18th place finisher in 1970 was Cheryl Bridges,the mother of Shalane Flanagan.

As for road races of any kind in 1972 in Frederick County,there were none.  And, prior to 1972 and the adoption of Title IX of the Education Act Amendments, there were no high school running sports for girls.

Of course, I knew none of this, having arrived in Frederick from the Chicago suburbs during the summer of 1973, intending to run cross country and track & field in my new home town at Frederick Community College. The coach at FCC was Jack Griffin. The organizer of all of the above events was Jack Griffin. By the end of the decade, Griffin would be instrumental in the founding of the Frederick Steeplechasers Running Club and the establishment of the first open road races in the county.

Griffin was involved in a wide variety of physical fitness activities in the county and most of the four to six members of the FCC team held jobs.  So, his solution as to what to do with me was simple, if inelegant. When I wasn’t working out with the men at FCC, he grafted me onto the Frederick Track Club, an all-girls club he founded in 1957.

And those who remained were motivated, talented, and intense. In these pre-Title IX days, I had seldom encountered female athletes.The Frederick Track Club was a force in women’s running, and I was about to get a rude introduction.

The first time I realized that as a mediocre male distance runner, I might be in over my head was at a workout that followed a blizzard.Griffin opted to run the workout on a plowed side walk that curved outside of West Frederick Middle School. Snow was piled high on both sides of the sidewalk and a path was cleared, just wide enough to allow two runners at a time to pass. Griffin put us on the side walk in groups of four, two in front and two in back. I was in the back on the outside.

Griffin dropped his hand and we took off sprinting. As we rounded the turn, the 12-year old creature to my inside drove her elbow into my ribs at a time when both of my feet were off the ground. I twisted awkwardly.When I landed, I hit a patch of ice and flew off the path and over the piled snow. Emerging from the other side with scrapes and a bruised ego, I threw my hands up and sought “justice” from Griffin. He bellowed, “Way to go! That is exactly what you do when someone tries to crowd you on a turn!  Knock his block off!” Evidently, it was going to be “game on” at the practices that followed.