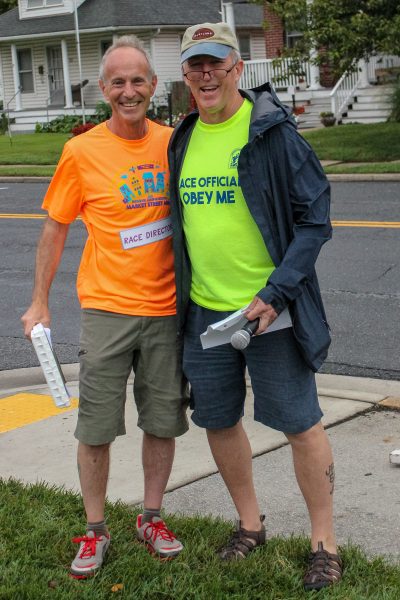 It was August 2017 and I was considering what it would take to have the Frederick Steeplechasers put on a new marathon in the Frederick area. I did a lot of research and planning and took the Road Runners Club of America (RRCA) Race Director Certification course. Luckily, I came to my senses and realized that if we did put on a marathon, I’d essentially be planning and executing all year, every year for the foreseeable future, and would not have time for anything else.

Serendipitously, in February 2018 the position for Market Street Mile race director opened up. I decided it would be a good idea to put my shiny new race director certification to work and volunteered for the position.

I was pretty anxious at first as I’d never done anything like this before. But I had a good team of volunteer leaders working with me:Harriet Langlois (my better half and mentor), Jill Cameron, Peggy Waxter, Brianne and Marc Heisel, Dave Snipes and Ed Hinde.

These great folks helped with the planning and execution and eased the burden of an otherwise difficult task.

(By the way, we’ve lost a couple of the leaders for next year, so if what you read here sounds interesting and you’d like to take on a leadership role with the Market Street Mile committee, please contact me at info@frederickmarketstreetmile.com.)

In general, planning a race has the following considerations:

Gee, writing that all down now seems overwhelming. Luckily,with Market Street Mile being the kick-off for the In the Street celebration, I didn’t have to concern myself much with the race course, medical staffing or coordination with the City of Frederick. And as with all of our races, insurance is covered through our club membership in the RRCA.

That still left me with a lot of moving parts to track, and I needed a checklist and timeline. Using a sample checklist that Harriet had developed for the Women’s Distance Festival, I developed a time-based to-do list tailored for Market Street Mile.

Thanks to all my predecessors, the venue and budget were in place. I just needed to coordinate with YMCA and make sure that the budget stayed in the black.

The biggest job was soliciting sponsorships. While the race entry fees cover the costs with a bit of a cushion, we always want to give as much as we can to our charity beneficiary. This is where I spent a lot of my time. We landed a new Premium Sponsor – Mattress Warehouse. Several other sponsors came back from last year, and several new ones signed up as well.

To create buzz in the community, strong promotion is essential. Brianne took this on initially and after she and Marc moved away from the area I was able to find time to keep that task going.  We used the club’s Mail Chimp group to send five or six mass emails between April and September and made announcements in our Facebook group as well. We used paid advertising on Facebook once, but the Mail Chimp distribution seemed to have more of an impact on our registrations.

RunSignUp was used for race registration. RunSignUp brokers the credit card transactions and distributes the proceeds monthly. There is something about the way RunSignUp promotes additional charitable donations which works amazingly well — we took in over $800 from this channel alone!With RunSignUp we were able to use race registration kiosks on race day, eliminating the need for processing paper forms. This saved volunteer time and meant that we didn’t have to run registrations down to the finish line where the timer was located.

Before we knew it, race day was upon us. 41 volunteers converged on the start line, finish line and across the race course. These wonderful folks magically made everything come together, just as planned: race day registration, packet pick-up, finish line awards. And the course marshals made sure that none of the runners got lost on the course! Well, their real job was to keep the vendors out of the runners’ way and to cheer the runners on as they passed.

As a race director, one needs to be prepared for the unexpected, and I got a good dose of that. During our youth heat, the timer had a malfunction of some equipment and the youth results were lost. This is a race director’s nightmare, and hopefully I won’t have to go through it again. It made me sad that I wasn’t able give out the awards to the kids on race day. Luckily, we had photos from very close to the finish, and we were able to reconstruct the finishing order and times from that within a few days after the race.

Other than the timing glitch, Market Street Mile was quite successful this year. We had 690 registrants and gave $11,654 to this year’s beneficiary, the Student Homelessness Initiative Partnership. These were both records by far!

I am so grateful for all the sponsors, registrants and volunteers who supported the race this year. And I’m looking forward to next year’s race, now with some experience under my belt.