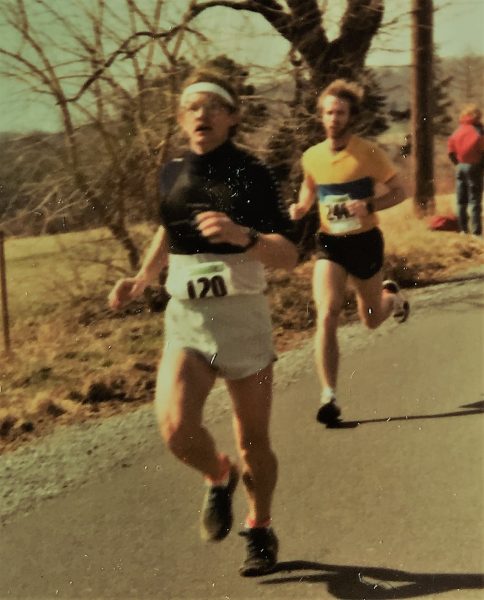 You may know Tim O’Keefe as the affable director of the Frederick Steeplechasers Summer Decathlon race series or as a past club president and long-serving board member. Less likely is that you are aware of his competitive abilities across almost every racing distance. With the Steeplechasers now boasting over one thousand individuals, it is very likely that none of them have competed as successfully across as many running disciplines.

Tim began competitive running in 1967 as a freshman sprinter on the track & field team at Bethel Park High School near Pittsburgh.  By the time he graduated, he had personal bests of :09.9 in the 100-yard dash and :22.2 in the 220-yard dash.  These are credible times today, let alone run on the cinder and clay, soft, uneven track surfaces of fifty years ago. At the urging of a math teacher, he did give cross country a try his senior year. The experiment was not long-lasting.

1971 saw Tim enrolled as a first-year student at Indiana University – Pennsylvania (IUP) where he continued sprinting for the track & field team. A pulled hamstring forced a reconsideration of shorter distances and moved him up to racing 440 yards where he would eventually establish a personal best of :50.0. A wistfulness enters his voice even decades later, “I could just never break 50.0 no matter how hard I tried,” he explains. (In an effort to make Tim feel better, 440 yards is about six feet longer than the 400 meters that is contested today. A rough conversion would yield a time of 49.7 for the metric distance).

After graduating from IUP with a teaching degree, Tim started his professional career at Broome Junior High School, a school that no longer exists, in Montgomery County. He joined a group of teachers that routinely jogged two miles after school and with this “base” he entered the National Pike Half Marathon in 1976. The half ran along Route 40A, from Boonsboro High School to the former VFW Golf Course in Frederick. “I had no idea of distance training or racing, and I ended up walking up Braddock Mountain,” he observed.

Yet, with minimal preparation and experience, he had managed to run the half in 1:31, on the way crossing South and Braddock Mountains and the innumerable smaller hills approaching Middletown. And, he was hooked.

Next up was Tim’s first marathon, the Schlitz Light Marathon held in Montgomery Village on Labor Day of 1978. “Again, I had no idea of tactics and I went out way too fast. At 15 miles, the roof caved in. I could not move without cramping,” he said. He finished in last place, running 3:58. (It seems implausible to current marathoners, but in the 60’s and 70’s marathons routinely closed up shop at four hours.  In 2016, the median marathon finishing time for men in the United States was 4:22:07 and 4:47:40 for women).

Around the same time, he moved to Frederick County. “I was vaguely aware that there was a running club in the area, but I didn’t want to do the steeplechase,” he says while grinning.  Tim’s assumption was that the Steeplechasers were just what the name implied, a group of runners running the steeplechase.

In fact, the Frederick Steeplechasers Running Club, founded a half dozen years before, was named for the clustered spires or church steeples made famous by the poem “Barbara Fritchie” by John Greenleaf Whittier. “The clustered spires of Frederick stand, green-walled by the hills of Maryland.”

The actual track & field event, facetiously referred to as “plastic cross country,” is usually contested over 3000 meters and includes 35 heavy barriers. The men’s barriers are 36” high, the women’s 30.” Seven of the barriers include “water jumps” with barriers set in front of a pit filled with water. The pit is three feet deep at its base and slopes up to track level 12’ out.  It is not an event for the faint of heart.  And, of course, Tim would eventually venture there.