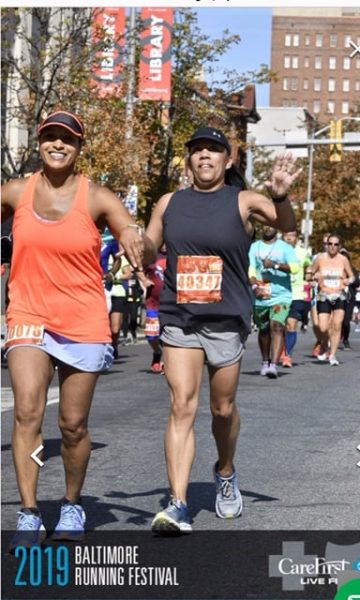 This week’s amazing member spotlight is on two lifetime friends, their running and training journey to their first marathon – Lynn Whiten and Evette Whisner.

“We have been friends for over 40 years and grew up on the same street (Center Street) in Frederick, MD. We attended the same schools through high school. Now, at the age of 50, we have decided to run a marathon. So here is the story of how we got here.

In 2015 I needed to get in shape and also wanted something to do, so I thought I’d start running again (I ran high school track – 100-meter hurdles). I was a sprinter, so running longer than one lap around the track was new to me.

When I started, one mile turned into two and two miles turned into three miles. I thought that this was amazing!

I signed up for the Frederick Women’s Distance Festival, which provided an opportunity to join a running group, Frederick Steeplechasers, for a very low cost and free training.

I remember attending the first group run. Over 100 women were there to train for a 5K and how to race it. I was welcomed by several coaches who wanted to understand my goals and committed to helping me achieve them. During that first run I met several women-runners. There were some who had never run a race in their life (like me), and others who were veteran marathon runners.

I trained with the group for one week before having to skip 4-6 weeks of training due to recovery from kidney surgery after I donated one kidney to my cousin.

During my recovery, I received a card in the mail signed by the entire 5K training group. After my recovery and when I was finally cleared to run, I started my training again and was able to complete my 5K with the group at the Women’s Distance Festival.

I’ve run this race every year since that time including the virtual race this year. It’s my favorite!

Over the years, I trained with several 5K Steeplechasers groups with the sole goal to keep me running. In a year, I usually complete five to six 5K races and an occasional 8K race, like the Solstice 8K.

I gave up shoe shopping for running shoes, medals, and t-shirts…oh the t-shirts! I really fell in love with running. So, what was next? The Mission 10 miler!

I ran my first 10 miler and it felt amazing. Someone told me,

I signed up for my first half marathon, the 2019 Frederick Half Marathon, also known as the Rainiest-Day-I-Didn’t-Train-For Marathon. Unfortunately, it never rained during any of our training runs. I was encouraged by my Steep peeps before, during, and after the race.

Back then I thought I was done having run just one half-marathon. Hmm, I guess not…

We continued to run and train together through the year. We ran the MCM 10K in 2019 and loved the feeling of being there. Evette and I both made a decision and committed to run the MCM Marathon in 2020. Although it ended up being virtual, seemed different and not what we imaged, the one thing that mattered the most was that we were completing our first Marathon together!

I was new to running, but not new to what it meant to be a runner. My brother, Eric, had been running for years and ran in several half and full marathons. After the death of my husband in January 2019,

I started working out on the treadmill and eventually progressed to running 30 minutes without stopping. I had never done it before and was extremely proud of myself.

My brother encouraged me to sign up for a 5K.

Running everyday was so healthy and healing for me.

Shortly after the 5K, I ran the Germantown 5 miler. It got even better after my friend, Lynn, suggested I join the Frederick Steeplechasers. I joined and committed myself to training runs.

The coaches were amazing and provided me with the resources, knowledge, and information needed to keep me running healthy. I would eventually run a few more 5K-s, including the Women’s Distance Festival.

Lynn and I ran together. We were talking after Lynn’s first half-marathon and I asked her,

I had to convince myself that I could do it. I trained and knew I was strong enough to do his.

In October 2019, I ran my first half-marathon at the Baltimore Running Festival. I found my passion. Lynn and I ran in the MCM 10K together, it was rainy, but we had a blast!

It was now time to go for it. I told Lynn, let’s do it! Let’s run a marathon! We signed up together to run both Marine Corp and Richmond Marathons.

Although we had to defer our races to 2021, we still decided to train. We joined the Fall Marathon group and hit all of our highest-mile runs together: 14 miles, 16 miles, 18 miles, and 20 miles. During some of our long runs, we would run extra miles to keep up with the training plan.

We did not plan to sign up for the Virtual Marine Corp Marathon but after putting in the work this fall, we decided to sign up just a few weeks before the race.