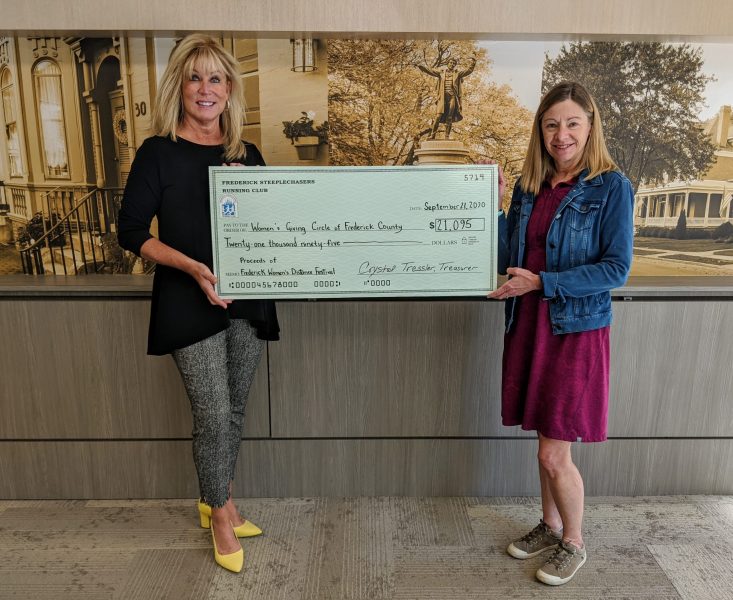 FREDERICK, Md. — In August, the 31st Annual Frederick Women’s Distance Festival, hosted by the Frederick Steeplechasers Running Club, went forward in a virtual format in response to the current COVID-19 crisis. 355 runners and walkers participated from the safety of their own neighborhoods during the nine-day race window in a show of support for women’s running, health, and fitness, and to raise money for the Women’s Giving Circle of Frederick County.

“It might have been easier to cancel the race outright when it became clear that we could not safely gather in-person this year, but the event is too important to our runners and to our charitable beneficiary,” race director, Harriet Langlois, said. “I am humbled by the response we received from our participants, donors, and sponsors. This event truly has a committed community behind it.”

The 2020 race raised $21,095 for the Giving Circle’s grant program, supporting local nonprofits that help women in the Frederick community. In addition to race registration fees, more than 200 businesses and individuals made donations to support the race and the Women’s Giving Circle. Since 2010, the event has generated more than $157,000 for the charity.

“The Frederick Steeplechasers Running Club, via the Women’s Distance Festival, remains our largest single donor”, said Linda Roth, chair of the Women’s Giving Circle. “With the COVID-19 crisis this year, the nonprofits that we support need our help more than ever, and we are just so grateful for the support of this community”, she added.

In 1979, the Road Runners Club of America started the Women’s Distance Festival in response to the lack of distance running events in the Olympic Games for women. While women’s participation in distance running currently matches or surpasses that of men, the Women’s Distance Festival continues to serve as a celebration of the determination and dedication of women runners across the country.

Dr. Elizabeth Liotta was the premier sponsor of the Frederick event in 2020 for the eleventh consecutive year.

The Frederick Steeplechasers Running Club has been supporting the local running community since 1975. The four Signature Races hosted by the Steeplechasers typically raise over $70,000 for the wider Frederick community, reflecting the club’s commitment to making Frederick a better place for all its residents. See steeplechasers.org for more information about the Steeplechasers and frederickwdf.com for details of the race, which will be held next year on August 7, 2021.

Pictured are Linda Roth (on the left side), Chair of the Women’s Giving Circle of Frederick County; and Harriet Langlois, race director of the Frederick Women’s Distance Festival 5K.