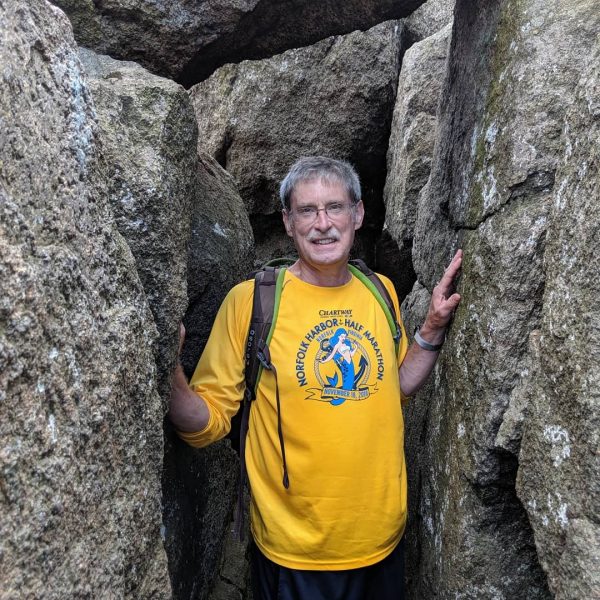 Happy November & Happy Monday! I hope everyone had a great weekend! I would love to share your stories, accomplishments, or anything else you would like to share, please send them to barb.meely@steeplechasers.org.

This week’s member spotlight is on the all-around great guy and motivator on the trails, the incredible John Gardner.

“My running journey began on December 8, 2015. A blood test revealed that my triglyceride levels were three times the upper limit (i.e., I had “gravy” in my veins), and I was beginning to suffer fatty liver damage. Self-conscious about my weight for most of my life, I had failed any number of times to improve my fitness. I was clearly insulin insensitive. The doctor started me on triglyceride medicine.

Eventually, I was able to jog continuously, extending my outings to three miles. At the same time, I started working on my eating habits, experimenting with improvements that might be permanently sustainable.

In the first few weeks you could not tell from the outside that anything had changed, which was a bummer. But I got another blood test and the inside improvement was dramatic. My triglycerides were lower and my LDL had dropped.

I decided to train for my first race, our local neighborhood 2016 Spring Ridge Elementary 5K “Roo Run.” That was fun, so I did a few more 5Ks. I started to meet other people who also enjoyed running.

I joined the Frederick Steeplechasers Running Club (FSRC) on the advice of my neighbor “Ultra Fred” Schumacher to tune into the local running scene.

I’ll never be very fast but that is OK. I could see myself improving as I ran more and started to lose weight. My next big goal was the 2017 Frederick Half Marathon, which I completed with tears in my eyes, not really believing it could actually happen.

I started watching the YouTube videos of Kerry Ward (“FullTiltWard”) introducing me to the possibilities of running even further, and running on trails. I trained for and completed the Thorpewood Trail 10K, which put me in a good place to enter the FSRC’s annual Rick’s Run, where I met more Steeps and fell deeper in love with the trails.

I started following Ethan Newberry, a.k.a. “The Ginger Runner”, began reporting on Strava, and made a whole new group of friends at “Hillbillies Trail Camp” on Orcas Island, WA.

As my miles increased, I experienced a series of injuries, forcing me to learn how to train for injury prevention and how to establish a running base. Then, I signed up for two Steeplechaser’s training programs. First, for another half marathon, and second, for the life changing 2019 Blues Cruise 50K.

The 50K race finish was only possible because of the other Steeps who led this program, trained, and raced with me. My family was there too, cheering me on all day at each key crossing and aid station (when they weren’t transporting an injured runner to medical care – so proud!).

Almost five years into running I still enjoy the trails for their own reward, I’m off medication, and I’ve settled into a significantly lower body weight that seems right for me. How did it happen? It remains intensely personal. It has to do with facing my mortality as a middle-aged man, wanting something more out of life, and the pathetic reality that at the time I had almost no self-control.

I still get nervous sometimes, even before a training run. For these times it is important to remind myself that

The FSRC has been there “every step of the way,” and there are many people to thank.

Billy Clem — for sharing his values.

Dave Hartman — for inviting me to volunteer with his aid station team at big races so I could learn and meet people.

RDs who have personally helped me including Keven Sayers, Christa Horn, Bill Susa, and others.

Mike O’Grady — for looking out for me on my first Watershed trail run.

Inspiration from so many fellow Steeplechasers with whom I have trained, laughed, and raced.

And John Clarke who has inspired me to dream big about the future.

What is it about running that gathers such a remarkable group of people?