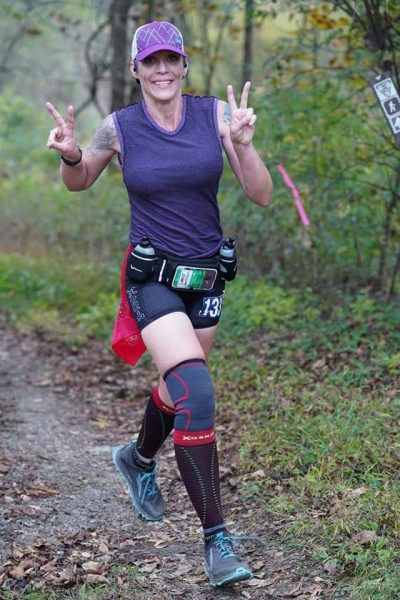 If you would like to share your stories, accomplishments, or anything else, please send them to Barb Meely, barb.meely@steeplechasers.org.

Barb Meely had the privilege to see this member grow as a runner and reach some amazing goals. This week’s amazing member spotlight is on Stephanie Harvey.

“I started running in 3rd grade for the Middletown Knight Striders and was coached by former Steeplechaser, Don Boyer, until I graduated high school. During this time period, I was not into running long distances, as I dreaded anything over a half mile, so I concentrated on sprints and high jump.

Aside from a few failed attempts to start running after high school,

My doctor eloquently pointed out that I had exceeded the 200-pound threshold and highly encouraged me to start exercising.

Motivation was an issue for me. A few months after this appointment, a lovely woman named Barb Meely started to work with me. One day, she and a co-worker were talking about running. Barb signed up for a 50K and our co-worker — for the Army 10-Miler. (I thought Barb was completely insane for training for her first 50K and told all my friends and family how crazy she was for running such a long distance!)

After hearing that the Army 10-Miler was a good 10-mile race for beginners, I immediately signed up to force myself back into shape! I trained on my own, which lead to a hip injury weeks before my race, but I stuck it out and finished.

As you can see from the photo below, it was hot and not a pleasant experience (and I clearly don’t embarrass easily if I’m sharing this atrocious picture for this post!).

After completing the Army 10-Miler, I joined the Steeplechasers and signed up for every 5K, 10K or 10-miler Barb told me was fun or had nice bling! It was an obsession.

My first half marathon was the Gettysburg half in 2018 and the distances kept growing. By spring of 2019, I was running a 25K, the No Man’s 50K relay race, with my partner-in-crime and teammate, Barb!

It didn’t stop there. Apparently, I was overly zealous and decided to skip the marathon and sign up for my first 50K, Blues Cruise, in October 2019.

I also took advantage of the 50K training program offered by the Steeplechasers.

The support from other Steeps in the training program was unbelievable and helped keep me motivated.

In addition, I enjoyed and greatly appreciated the encouragement and advice given to me by veteran Steeps, Billy Clem and Steve Dobson. Their insanity turned out to be a great motivator! LOL!

After Blues Cruise, I completed three other 50K races. I was now one of the crazies! However, it didn’t stop there.

This year, I dedicated my summer to train for the Stone Mill 50-Miler. Never in a million years would I have guessed that two months before my 46th birthday I will be running 50 miles, and I did! The love and support of this running club made it possible for me…kept me motivated, gave me advice, supported me.

I always feel like a rock star after my accomplishments. What I thought was impossible just three years ago, ended up being more than I could have imagined. Thank you to all the Steeplechasers who have supported and encouraged me! I could not have done any of this without you!”