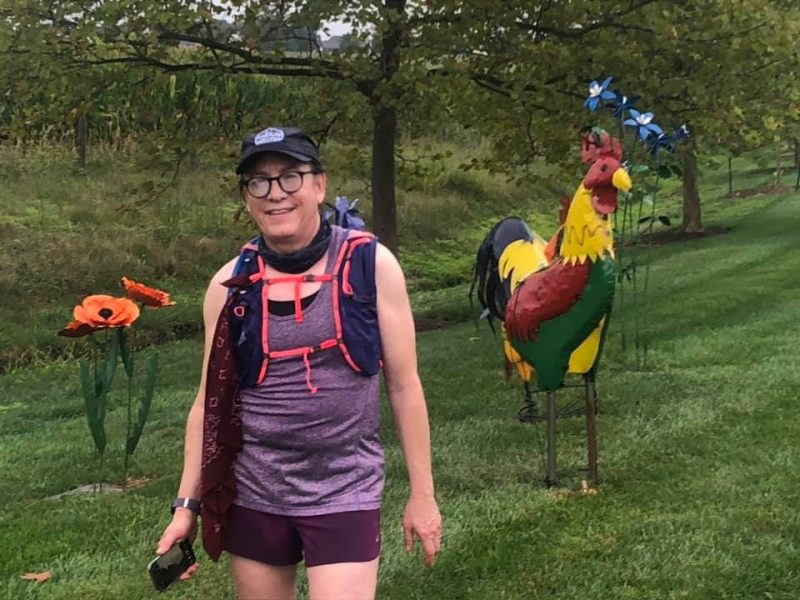 If you would like to share your stories, accomplishments, or anything else, please send them to Barb Meely, barb.meely@steeplechasers.org.

I was never involved in high school athletics, being pretty academically-focused, and only played a bit of intramural sports in college.

I never considered myself a runner, just someone who ran for basketball or softball. I continued playing club softball off and on into my 40s, and then sort of slacked off, until my GP told me I’d better do something to help strengthen my body and avoid osteoporosis and other big words.

I started running in January 2015 as a New Year’s resolution to run a 5K, using an app on my phone to coach me off the couch. At the time, I often quoted to myself Gimli from Lord of the Rings: “Keep breathing! That’s the key! Breathe!” That’s still sound advice!

After a bit of a false start, due to a bad case of bronchitis, I was able to run my first race in Baker Park in May of that year. It was hard, but I was hooked. I ran a few more 5K races that year, and capped it with a 10K.

I continued running 5K races the next year, struggled a bit with plantar fasciitis, but kept slowly improving, still on my own.

It was in 2017 that I decided that I wanted to try running a half marathon, and that there was no way I was going to get there on my own. I started looking around for private coaching, and in the process discovered the Steeplechasers.

I guess I had had some level of awareness of the Steeps before that, but when I found out what a great deal it was, I signed up.

During that summer I ran my second 10K, the Race for the Pie, and wondered on that hot July day, on that hilly course, what I had got myself in to. Someone saw that I was struggling, and took it upon herself to encourage me through the last couple of miles, and I have been grateful ever since.

Just this Saturday, I ran that distance on a pleasant training run. If you had told me in 2014 that would happen, I would have laughed long and heartily!

It’s almost six years since I started running, there have been injuries, certainly, with strains and stress fractures, but I’ve come back stronger each time, and I’ve never felt stronger or healthier!

My easiest runs are generally longer and faster than that first 5K. A huge part of that is due to excellent coaching. I won’t list names because I know I’ll miss some!

I’ve also made some great friends. Where else could I text someone like Michelle, Amanda, or Max on a whim and say, “Hey, wanna run six miles this evening?”