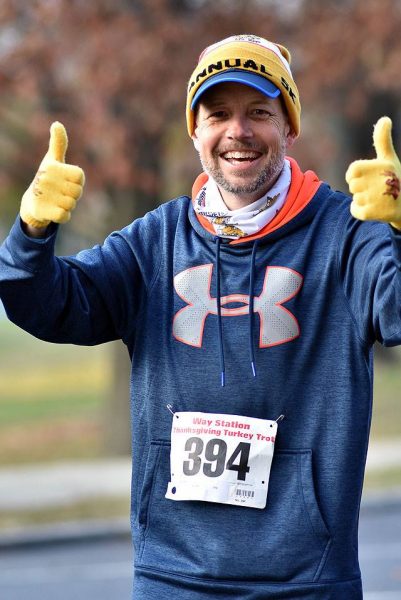 All Steeplechasers positions are 100% voluntary and we have a wide variety of volunteer positions available. Please make sure you thank those special people who donate their valuable time and if interested in lending a hand, please reach out.

This member was one of my first coaches. He is always friendly, supportive, encouraging to all and has stepped up once again to volunteer lead the Steeps Trail Running Group. This week’s amazing member spotlight is on Billy Clem.

“Like so many others in the club, I didn’t become a runner until later in life. Growing up I always found myself active outdoors or looking out the window wishing I was outside, yet somehow became an adult spending far too much time indoors on my butt.

In my mid 30’s, I started making some changes to my unhealthy lifestyle but hadn’t yet discovered running. Then I met an amazing woman (my wife, Risa) who was a runner and a triathlete, and saw what it meant to her.

I started running with her because I wanted that feeling too.

I trained for and ran my first Frederick Half Marathon in 2008, but it was the training that brought the real feeling of accomplishment.

Flash forward to 2013 when Risa was injured and encouraged me to sign up for the Frederick Steeplechasers new marathon training program. I joined and discovered the Steeps were about so much more than just running.

Thanks to Mark Lawrence’s many pitches at local races to “join the Steeplechasers,” we had been in the Steeps for about a year but hadn’t met many people until the training programs started.

Pam Geernaert was one of my pace partners who also happened to be the club president. She and Mark showed a few of us how easy it was to be more involved in the club.

With the help of the Steeps, we later got coaching certifications.

I could not believe that just a few years after running my first Frederick Half and hardly knowing anyone in the race, I was now part of a giant supportive community.

Frederick went from being a place we live to a tight community of friends. Risa and I have met so many wonderful people because of the Steeps.

A few years later another friend I met from that first marathon training group (Tim Thompson) took me on my first trail run. He told me all about the people who introduced him to trail running and I soon realized just how laid-back trail running was.

Crossing the creeks, jumping over logs, seeing cool birds, and being out in the woods really brought me back to being a kid.

I soon signed up for my first trail race (Catoctin 50K) because I just loved the community of fun-loving trail runners like John Godinet who talked a lot, walked a lot, ate a lot, and enjoyed beers after the runs. This was my kind of fun and really brought me so much happiness.

Following my trail running friend, Nicole Davis, I just started as the new Steeps Trail Running Chair and I hope to tighten and expand our trail community as we come out of this COVID-19 haze.

I plan to introduce new trail runners to the people that helped and encouraged me out on the trails because I know they will do the same for them.

Some days it’s hard to get out the door for a run, if you ever feel the same, you’re not alone.

To say the Frederick Steeplechasers have been a big part of our running lives really does not begin to explain how our family feels. The Steeps have made our hometown a smaller and more rewarding place to live.

Thank you to all of you who have said a nice word or reached out to me when I’ve struggled. I love you guys.”