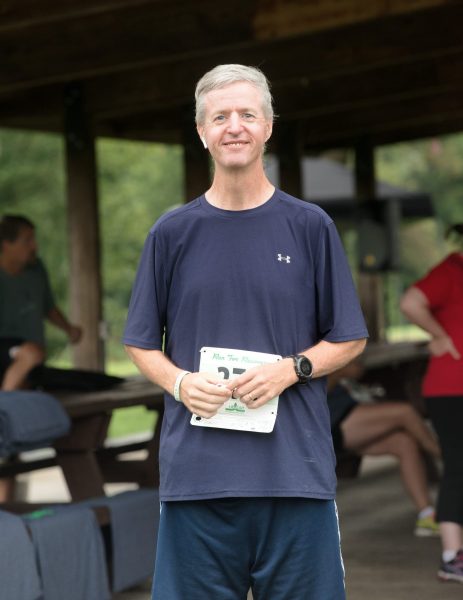 I hated to run in High School. I went to a military boarding school and running was a form of punishment for too many demerits.

I also tried out for the cross-country team but got bad side stitches and stopped. This was long before the internet and I didn’t know what was causing them or how to fix them.

Fast forward to my 50s, I wanted to lose some weight and had gotten a Planet Fitness gym membership. I also downloaded “Couch to 5K” app on my phone and got lots of treadmill time.

My buddy, Jack Edwards, got me to sign up for my first 5K on the boardwalk in Ocean City for St. Patrick’s Day. I transitioned into an actual road runner!

After finishing the 5K race with a 34-minute finish time, I looked for a local running club with training programs. I became a member of the Frederick Steeplechasers in June 2017 and joined the club’s 5K and the Half Marathon training programs.

Coach Josh taught me how to run smart (Easy days = Run Easy) and not run so hard and/or long all the time. My pace improved rapidly over a very short period of time.

I then became a trail runner and completed my first 50K at Greenbrier in 2019.

Last year, in 2020, I was having major car problems. My Mustang was randomly stalling at traffic lights. I injured my calf pushing it out of an intersection. The injury morphed into Achilles tendinitis. I did several months of physical therapy.

By June 2020, I tried to resume running. Unfortunately, I also developed stabbing foot pain and ended up having foot surgery in September to correct some bone alignment. It took the whole six months to fully heal.

Not being able to run just added to the suck fest that the year 2020 turned out to be.

I was finally able to return to running in February of 2021. I immediately signed up for the Steeps Spring Half Marathon training group and began to train for the Frederick Half Marathon. Honestly, it felt like starting over. Maybe because it had been over a year since I had run last.

Thanks to all the sage coaching advice and awesome group runs, I am slowly getting my endurance back. Unfortunately, not much speed has yet returned. My heart rate tends to spike on most runs. I am trying to be patient.

Now, I’m just taking it one week and one race at a time. I did sign up for the Half Cat (Catoctin 25K) in July 2021 and the Virtual Boston Marathon later this fall. Hopefully, I can stay injury-free.