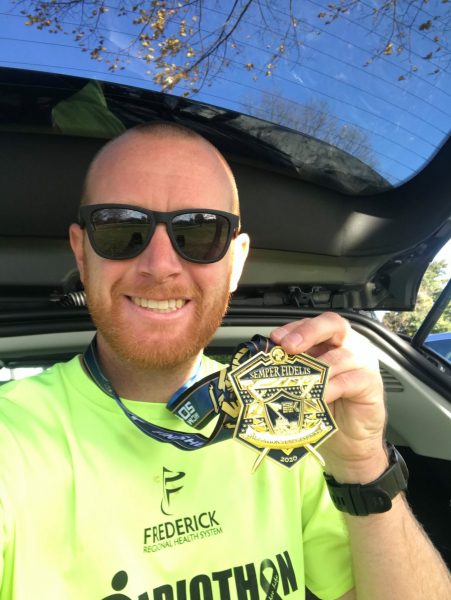 “My grandfather always said, he was going to make a runner out of someone in the family. I suppose I was his choice as many of my visits with him were spent being timed around a track or up and down the halls of his apartment. Since that was his wish, I decided to try cross country and track in high school. Unfortunately, he passed away before he could ever see me run for real.

My main events in track were the hurdles and the mile. On my last track meet, to my delight, I scored my 4-year goal mile time of 4:55.

After high school, I would do some 5K-s or 10K-s here and there, but spent several years away from running.

In 2015, I don’t remember why, but I just decided to sign up for the Frederick Half Marathon and see what the fuss was about.

I had no clue what to expect, so I went in thinking a 2:30 would be a really great time. To my surprise, I came in at 2:01. I was hooked and became obsessed with finishing under 2 hours.

Fast forward a few years and I was no closer to my goal. I decided to join the Steeplechasers in 2018 and sign up for the Half Marathon training group to help improve my time and make some new running friends.

The making new friends was almost instant as I made two of my best running friends right away in coach Heidi Novak and Patrei Ningen. Coach Heidi gave Patrei and I the monikers of troublemakers as we were always adding mileage to our runs.

With the great training plans and some great new friends, I finally broke the 2-hour goal at that year’s Frederick half.

The next year I decided to become an RRCA Level 1 coach and coached the Spring and Fall Half Marathon groups.

This year, I jumped into the deep end of FSRC as President Heidi had asked me if I wanted to be the Vice President and I happily agreed, along with our little troublemaker, Patrei, who is now serving as the FSRC Secretary.

I have also jumped into the deep end of running, too, as this year I decided to sign up for the JFK 50-miler and really push myself to the limit. I am so excited for this new adventure and who knows what the future will hold. I do know that Grandpa Paul Wood would be over the moon with happiness at the runner he made out of our family.”