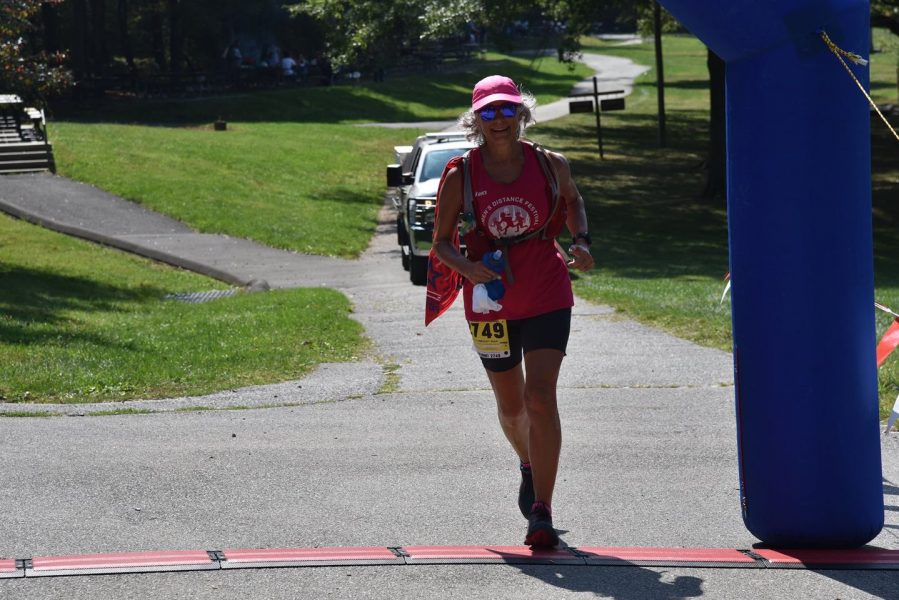 “I consider myself athletically challenged. Anyone who has run with me knows I can fall standing still.

Unbelievable to me, I won a hula hoop contest at my son’s elementary school, then won a jump rope contest. Afterwards, a mom named Shelly approached me and said that she and some other moms were putting together a relay team for the Frederick Full Marathon, and asked if I would I be on the team.

I told her I was not a runner. She, then, volunteered to train me – her mistake – but I became one of the Myersville Sole Sisters and Shelly was a trooper.

We tried jogging and, within a few feet, I swore I was going to throw up or pass out and she told me if I was talking, I was fine to keep moving.

My performance at the marathon was not remarkable but I continued running 5Ks, which is how I met Mark Lawrence who told me about the Monday/ Wednesday running groups that I eventually started joining.

I am so thankful for Malcolm Senior, who would run back and check on me and Megan Paige, Christine Mosher, and my friend, Carly Fisher, who all ran with me when I first started.

My father became ill and my running suffered as a result. When I was able to join the group again, everyone was faster and I was very slow.

Again, I said something silly to Casii Dodd about, maybe, one day running a full marathon. Casii encouraged me to sign up for one out-of-state and it rained the whole time!

Then, I mentioned the one marathon I wanted to run was Marine Corps Marathon, so Casii said, let’s enter the lottery, what are the odds? Let me tell you, they were good, and it was very hot that day.

Finally, on the cusp of joining another decade, I have run two full marathons, many half marathons, and including other races that my friend, Maxann Davis, suggests on the spur of the moment.

We are fortunate to have the wonderful training programs and the coaches who support them.”