The City of Frederick was still pretty nervous about the pandemic at the beginning of Spring, so the thought of permitting a big event like the Frederick Running Festival that normally happens the first weekend of May made people uncomfortable.  Among them were the Mayor and Board of Alderman in Frederick.  As a result, the Running Fest got pushed back to an alternative date of Saturday, July 11 for 2021.   Since the event was not held last year, newer club members may not even know that it’s been a tradition for the Steeplechasers to volunteer to fill most of the course marshal positions for the event.  This goes all the way back to when the featured event of the Frederick Running Festival was a marathon!

For those that do not know, the beginning of the Frederick Running Festival tradition started with a full marathon back in 2003 with an energetic young woman runner named Rachel Ridgeway who made a dream of having a marathon here in Frederick come true!  Rachel organized it and acted as the Race Director for several years even after Corrigan Sports got involved in professionally managing the race.  For Rachel, it was not an entrepreneurial dream.  She just thought it would be cool to have a marathon in Frederick, got the backing and support of then Mayor Jennifer Daugherty to permit it, and then organized friends and fellow runners to make it happen!

The first Frederick Marathon was scheduled in the dicey weather period of early spring, in March of 2003.  The course took runners through Frederick, starting from Harry Grove Stadium with both marathon and half marathon options.  The half marathon route was mostly in-town, while the full took runners out New Design Road almost to Adamstown and back.  March weather came through with a little snowstorm that turned the trek on New Design Road into a slushy mess!  I ran that one!  It was only the second marathon I had ever done, so I PR’d with a time of 4:10 that was only slightly off my 4-hour goal, but I have always been proud to say that I ran a marathon in a snow storm!

Rachel learned a few lessons the first year and came back to try it again for a couple of years when the event moved to the Frederick Fairgrounds and the date changed to the first weekend in May.  The route also changed quite a bit with the out-of-town leg no longer on New Design toward Adamstown, but out Rt. 144 crossing the Monocacy River to the hills of Spring Ridge.  The route went past the front entrance to Spring Ridge on 144 to Terra Firma Road, where the field hung left at about mile 17 and made a long steep climb up Terra Firma and back through some up and down in Spring Ridge, before heading back to the Fairgrounds.  It was quite a challenging course!  I ran that one too but do not remember it fondly. 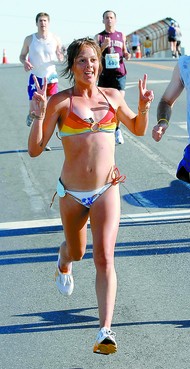 The other thing I noticed about the event in those early years was that there was no significant role being played by the FSRC.  Other than members running in the race and perhaps Tim O’Keefe and a couple of others volunteering for some duties, I noticed that the Steeps had little presence in helping with the event.  I also noticed that, while participation in the Frederick Running Fest was growing (the half-marathon option in particular), our club’s membership was shrinking!  I felt like we needed to be involved!

When I became president of the Steeps in 2007, I reached out to Rachel and said that I would volunteer to take charge of the course marshals and that I would fill many of the volunteer positions with Steeplechasers who were not running by imploring club members to be “ambassadors” for the event.  At the same time, I also committed to organizing a series of official training runs leading up to the event.   Playing this kind of role in what had become Frederick’s premier running event felt like an appropriate mission for our running club.

In the years that followed, the numbers in the half marathon kept growing much more so than the marathon. By 2011, Corrigan Sports, who had taken over the professional management of the event, while retaining Rachel as Race Director, decided the marathon was more trouble than it was worth, and the half marathon became the feature event and continued to grow.  But the Frederick Steeplechasers continued to serve as course marshal ambassadors through all the years.

For this year, following the pandemic, the race has been pushed back to July 11, a time when many are on vacation or away doing other things.  As a result, it will be more challenging to find volunteers this year.  More than ever, we will need club members willing to step forward to serve as ambassadors for Frederick’s largest running event.  If you are not running in the event, please consider volunteering.  To volunteer, please email Mark Lawrence, at markruns50@comcast.net.  Tell your friends as well.  IT’S A FUN EXPERIENCE!  You don’t need to run in mid-July to shed calories.  Instead —  cheer on others, while contributing to a great community event!