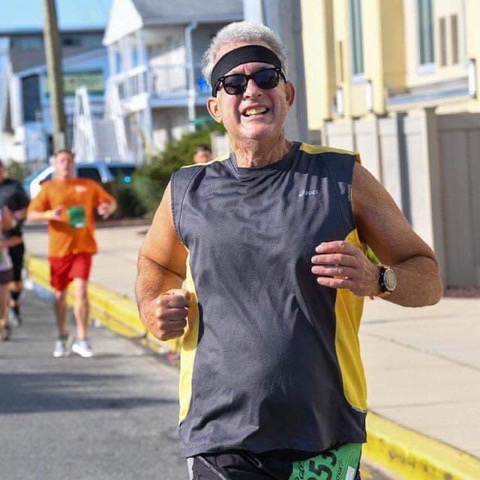 ~First in an occasional series~

Editor’s Note: Many Steeps members who have moved away from Frederick continue to stay in touch with us, and even travel back here for training, racing and socializing from time to time. We thought we’d reach out to learn more about our long-distance club members. This month, we’re featuring JACK EDWARDS.

Jack joined the Steeplechasers in 2017 when his company relocated its headquarters to Frederick. He had been a member of his high school track team, but describes himself as a discus thrower who didn’t run. That all changed during the “running craze” in the late 1970’s, when he completed numerous races in the Pittsburgh area.

“I had my best 10K time in the mid 1980’s at the Pappan’s 10K in Beaver, Pennsylvania, when I ran 47 minutes and change,” Jack recalls. “I was running against one of my good buddies and really pushing myself.” Since then, he’s run over 25 half marathons, six of them while vacationing in sunny California.

Last year, Jack retired and decided to move to a less expensive area. He lives near Milton, Delaware, about nine miles from the shore, but has no plans to give up his Steeps membership. “It’s a bargain,” he says, and well worth making the occasional drive to join a club training or pub run—though he doesn’t get back to Frederick quite as often as he would like to.

Most recently, Jack joined the fall half marathon group and ran the Summer Solstice 8K in Walkersville, where he had fun seeing old friends. “I also signed up for a race series here in Delaware with the Seashore Striders and Races2Run (beach races), so I have to miss some of my favorites, like the Market Street Mile,” he says. “But I will probably be back to visit about eight times a year.”

Finally, a fun fact: In 1972, Jack lived on the same floor of his college dormitory as Tim O’Keefe, who later became Steeps President.  “I really surprised him two years ago when I showed up at one of his decathlon events,” Jack recalls.

It’s a small world, after all…and thanks in part to the Steeps, those personal connections endure—even across the miles.