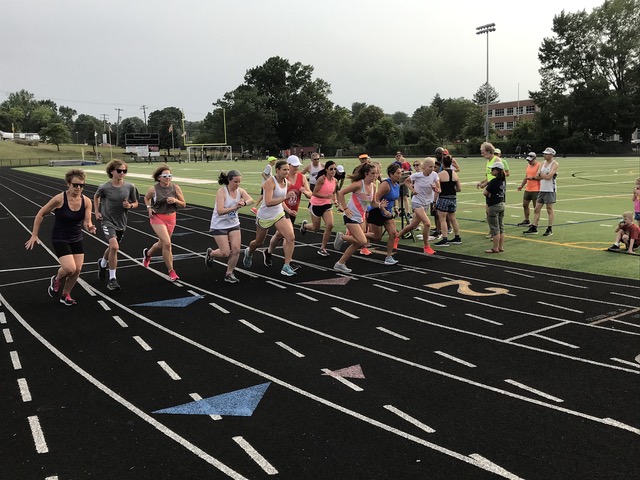 None of those got in the way of a group of Frederick Steeplechasers having fun with some summer speed.

With no track to run on the modified version of the Decathlon saw the distance events being run in parks throughout the county. Runners were not only treated to scenic settings but many parks they had no idea existed (Othello in Knoxville). The 1500 to 2 mile distances were held on roads or paths in the park where the rolling terrain added a new challenge. Arthur Leathers ended each race by letting me know “That was really hilly”. While I could commiserate, it didn’t seem to affect his speed as he still did the mile in the 4:40’s range. The parks did provide nice cool down runs on the available trails.

We finally got back to Frederick High School’s track on July 8 for the 800 meter race. Not only the first track race but also a Grand Prix event. Thanks to Heidi Novak and John Leonardis runners were treated to Bruster’s Ice Cream. At the end of each Decathlon event, there is a relay or run of some sort. I called out for all who wanted to do the relay to form a line by the clock to make up teams. I turned to see how many were running which turned out to be zero…there was a line formed but it was in front of the ice cream wagon.

Ron Elliott was a standout on the track as he blistered all the short distances. This included an epic comeback win over Scott Wallace. Scott is no slacker…in the 600 meters he clocked a 1:30. That is repeating 30 second 200 meter runs. Scott’s wife Melissa entered the master runner tier and immediately tore up the field in the 200 meters. He looks 45, runs like he is 35, but Pete Wergin is 55 and runs with the fastest runners at every distance. The beauty of an age graded series is that runners like Pete who can stay with the 30 year olds are rewarded well deserved adjusted times. Beside watching amazing races, the other exciting aspect is runners who are on the track for the first time. Kathy Cea is incredibly fast on the roads but watching adapt that road speed to the track was a thing of beauty. She obviously was a quick learner as her times were consistently in the mid 70% range for her age. And if all that isn’t enough, there is Mr. Ironman himself, John Way. John ran his 119th Summer Decathlon race without a miss. Even more impressive when you realize that he ran 4-5 other races each week.

Many thanks to Heidi Novak and the executive board for allowing this to be a free event to members and also to Heidi, Chris Dutton, Crystal Tressler for being event host and hostesses.

Being an all volunteer series having people step up to be host/hostesses and timers is crucial. The others who stepped up were George Ladle, Claire Heasman, Dana Leathers (new mom!!!), Rachel Ridgeway, Lindsey Weaver, Darren Elliott, and Scott and Melissa Wallace.

But wait, there’s more…join us at the FSRC picnic on August 21 to find out who the top award winners are and more about the 10 fabulous Wednesdays of summer!