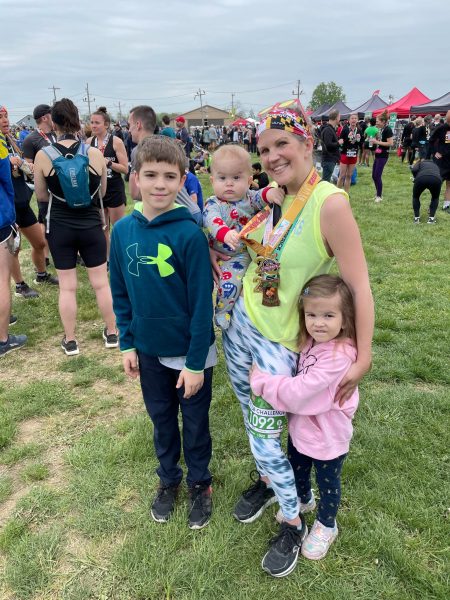 My running journey began in 2013 with a 5K but did not really begin until my dad passed away in May of 2014. The first official race I ran was the Zero Prostate Cancer Run in Arlington, VA, a non-profit for prostate cancer research. My dad was an avid supporter of the cause.

Growing up, I was somewhat of an athlete. I love skiing and have been a skier since I was four. Archery, volleyball, cheerleading, and pom dance kept me busy in middle school and high school. I could barely run a mile without having trouble breathing, then I found out I had exercise induced asthma. After the diagnoses, I was able to control it. After that, I gained a lot of weight and was not really active.

Fast forward eight years later, in 2012, I got married and moved to Frederick, MD.

In 2014, right before my dad passed, I joined a local women’s running group. I met and made so many friends through that group. I ran my first Ragnar with these women and learned a lot about training and the do’s and don’ts.

After my dad had passed, I decided I would run a half marathon in his memory. Right before my half, I sprained my ankle, but it did not stop me. I went on to complete the Philly Half Marathon in November 2014.

Since then, I have run six marathons, numerous half marathons and three Ragnar DC’s.

I planned to run the Marine Corps Marathon again, but a month before, a car hit me. At the time, I was four and half weeks pregnant. Thankfully, the accident didn’t affect my pregnancy and my daughter is now a sassy four-year-old. Unfortunately, I did have some occasional lingering pain from the accident that affected my running, but that did not stop me. I decided to defer my entrance to the Marine Corps Marathon to the following year.

I jumped right into marathon training with the Steeps in June of 2018 and completed the Marine Corps Marathon that I had deferred previously. In August 2020, I had become pregnant, lost the baby, and became pregnant again in November 2020.

I was signed up to run the Frederick Running Festival Nut Job [a 5K the night before and a half marathon the following morning] but then it was moved to July, too close to my due date, and so I had to defer yet again. Glad I deferred, as I unexpectedly had my son the same weekend! I did, however, get to run the Virtual Marine Corps Historic Half seven and a half months pregnant.

Between a car accident and three children, my running has suffered tremendously and I am not as strong as I was in 2017, but it will not stop me. Training is now harder to do because I usually need childcare. I do hope to become strong again as my children get older. Therefore, for now, I will focus on enjoying my children and run when I can.

Every race since my dad’s passing has been for him and I know he is proud of me.

Have an idea or a person to highlight in our Member Spotlight series? Contact Barb at barb.meely@steeplechasers.org!