To request that your event be added to the Steeplechasers Events calendar, please click on Add Event.

Race Directors should use this form to request that local running events (within 75 miles of Frederick, MD) be placed on our calendar.

Your submission will be reviewed before publishing — this process can take several days.

Note: FSRC reserves the right to choose which races are published.

You need to be logged in to edit or list events. If you have an account, please log in below, otherwise please use the “Register” button at the bottom of the page to register. 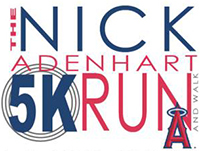 This is the 10th Annual Memorial Run for Nick Adenhart.

Nicholas James “Nick” Adenhart (August 24, 1986 – April 9, 2009) was a graduate of Williamsport High School. He was highly touted as a high school baseball prospect until an injury in his final game required Tommy John surgery. He was drafted by the Angels in the 14th round of the 2004 Major League Baseball Draft, and began playing in their minor league system after the surgery was a success. He spent three full years in the minor leagues before making his major league debut on May 1, 2008. After appearing in three games, Adenhart spent the rest of 2008 in the minor leagues developing his skills, and in 2009 he earned a spot in the Angels’ starting rotation. Unfortunately, just after pitching his first start of 2009, Nick was killed in a car accident by a drunk driver.

This tragedy affected many members of our community and this annual event raises money to be used by local youth programs at Williamsport High School.