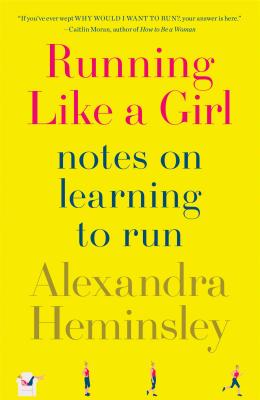 Alexandra Heminsley was never a runner. She was a bar-goer, a partier, and a fad exerciser. But on something of a whim, she decided to finally believe all of those rumors of the “runner’s high,” and set out for a jog.

That first “jog” did not go well. With humor and candor, she relays the details of her nightmarish less-than-one-mile trek in the opening chapters of her book, Running Like a Girl: Notes on Learning to Run. But what is so interesting about Heminsley’s account of her months spent learning to run is her dedication, because even though that first run was a disaster, she kept on running. And running. And running. Until she found herself at the starting line of the London Marathon.

Running Like a Girl falls squarely in the camp of “If-I-can-do-it-so-can-you” motivational reading, but manages to pull it off without ever feeling preachy or pushy. Heminsley has a sense of humor–there were moments here where I literally laughed out loud–but also a depth of emotion that brings the highs and lows of her running journey to life. She manages to motivate without talking down, making her tales of running equally relatable to those who have never run a mile, those who haven’t run in years, or those who set out for a steady jog every morning before work.

The book is divided into two parts: first her story of training and running her first marathons, then sets of training tips, advice, and myths explained for anyone interested. Her advice ranges from the exceedingly girly (Paint your fingernails before a race so you have something fun and colorful on while you run.) to the extremely practical (Hydrate, hydrate, hydrate. Get fitted for real running shoes. Listen to your body.), and the myths debunked included the standard (Running is bad for your knees.) and the less familiar (something about prolapse that I’ll choose not to go into here).

I first read Running Like a Girl when I was brand new to running, and it changed my perspective on the sport. Here was someone like me, who believed that the runner’s high was nothing but a myth and that running was just for exceedingly fit people with strong calf muscles. Someone who suffered the same insecurities about running in public, lining up at that first starting line, working through that first injury–but who managed to run all 26.2 miles a first, and second, and third time. By the time I finished the book, I’d decided I wanted to someday run a full marathon (a goal I’ve since set aside). Yes, she made it sound that fun.

Though, as the title suggests, Running Like a Girl tends toward female runners, with advice on nail polish colors and sports bras, Alexandra’s story of her own push to that first starting line will resonate with anyone, male or female, contemplating setting a new running goal.