Although Heidi enjoyed keeping active with exercise classes at the gym, she didn’t start running until the age of 40. When the school she was working at put on a 5k, she joined some moms doing a Couch to 5k program to prepare. She got first place female (it was a small race) and learned about the Steeplechasers from Mark Lawrence who was working the finish line. She joined the Steeplechasers and participated in the Half Marathon Training Program the following spring. She completed several half marathons before completing her first marathon in 2016. The support and knowledge she gained from the coaches of the training programs inspired her to become a running coach. In 2017 she became an RRCA Level I Certified Coach, hoping to inspire others to love running as much as she does, and to help them set and achieve their goals. Heidi has also served as the Chair of the Social Committee and the Co-Chair of the Training Programs. When she isn’t running or hanging out with her running friends, Heidi teaches at a Montessori school and is a teacher trainer at a Montessori Training Center. 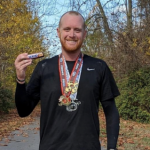 Chris ran cross country and track all throughout high school and had a passion for running.  After high school, he ran a few short races here and there but never really kept the passion.  In 2015, after a lifetime of thinking a half marathon was insane, he decided to train and give it a shot.  After that he was hooked.  He joined the Steeplechasers in 2018 to train for the Frederick Half Marathon and quickly made some very close new friends.  Since then, he has run 20+ half marathons, 1 marathon, and 3 different types of 50ks.  In 2019, he became an RRCA Level 1 coach and has coached the spring and fall half marathon groups for FSRC.

Crystal Tressler has a passion for road running and loves to find new and interesting routes. She began running casually at age 27 as a way to prepare for the 30-mile Avon walk. For several years, she continued running off and on between children being born, working full-time, and life happening. In 2013, Crystal joined the Steeplechasers as a participant in the Women’s Distance Festival 5k training program. The friendships that developed following the training were the catalyst for longer distances and more time shared with good friends. With the continued support and training from the Steeplechasers, she ran her first half marathon the next year and the Marine Corps Marathon in 2018. Crystal joined the coaching team in 2017 and is an RRCA Certified Level I Running Coach. When not running on the road, she is running after her 3 young children or volunteering. 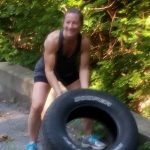 Patrei began running in 2012 when her oldest son joined the USMC.  She ran exclusively on the treadmill during the time he was away at boot camp and until she came across the FSRC Facebook page in April 2013.  She decided to become a member of the running club joining just in time for the last group run of the half marathon training season before the Frederick Running Festival that May.  That was her first half marathon.  Since then, she has completed many 5k, 10k, 10milers, and half marathon races.  In January 2021, she also completed a marathon distance for the first time although not an official race, she did it just to see if she could.  In addition to running, Patrei also spends a lot of her time strength training at SoldierFit. 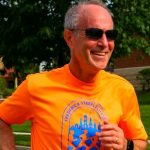 Lou started running in 2005 after his knees gave out from playing indoor soccer. This was 10 years after his wife (Harriet Langlois) first started trying to get him to run, so it worked out for the best. Now he’s completed 34+ marathons in 28+ states, with a goal of hitting all 50 states. It’s a process. He was President of FSRC from 2015 thru 2016 and was awarded RRCA’s Outstanding Club President of the Year for 2016. Lou’s passion is software, and he looks for ways to reduce volunteer workload through the application of technology and process improvements to club operations. Lou is currently FSRC’s Chief Technology Dude and Race Director for Market Street Mile. He also serves as RRCA’s State Representative for Maryland and DC. 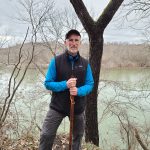 Mark started running while serving as a military officer but didn’t really get into it until joining the Steeplechasers at 42 years of age in 2001.  His first goal when joining the club was trying to keep up with Tim O’Keefe’s 8 mile training group runs from Frederick High School on Sunday mornings.  Once he could do that, he signed up along with his son Adam to do the JFK 50 Mile race.  Over the next few years, he finished that event with both of his teenage sons.  By 2004, he and his son Marshal became the top two Frederick County finishers in the JFK and Mark was named the Steeplechasers Masters Runner of the Year.  From 2004-2007, Mark averaged finishing 7-8 races of marathon distance or longer.  But his bowlegs started becoming a problem as knee pain began to slow him down.  At the same time, by 2006, he became concerned that the Club’s membership had fallen to under 100 and he developed a vision of how to turn that trend around by doing more to reach out to entry level runners and to have the club get focused on contributing to the community at-large.  After sharing that vision with the Club’s board, he was asked to serve as President where he served for the next 5 years.  During that time, to cope with his achy knees, he learned and was teaching others the Chi Running technique.  He held group runs and began attracting many entry level runners into the club through beginner group runs and the teaching of that technique on both roads and trails.  He also began to coach a kid’s group that competed in track and cross country with other youth runners in the state as he taught them to learn good technique and become “runners for life.”  By 2012, the club had quadrupled in membership and Mark helped to continue that growth serving on the Club’s Board of Directors and picking up duties orchestrating the club’s volunteer race support services for 20-30 charity events each year and as the Race Director of Frederick’s Turkey Trot which became the largest 5K race in Maryland.  During this period, he continued to coach and draw members into the club through coaching and as the Club’s “Finish Line Guy” who would announce to the crowds at those races, “If you are a runner in Frederick County, you too should be a Steeplechaser!” 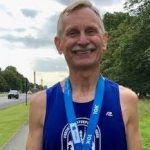 I’m Tim O’Keefe and have been a Steeplechaser for 41 years. My journey in running began in 1967 when I was a sprinter and jumper for my high school track team. After medaling at states in the 200 I moved up to the 400 in college. After 4 years I still could not crack the 50 second mark. In 1975 I began teaching in Rockville and friends invited me to join them for a “jog”. Having gotten in shape make it a whole 5 miles, they enticed me into running a half marathon with them in 1977. They bailed but I ended up running my first race…the National Pike Half Marathon. All on alternate 40 from Boonsboro High School to the the VFW by Fredericktown Mall. The hills and mountains destroyed me but I finished (1:39.23) AND got a medal! A runner was born. I continued to run getting all the way up to an 8 miler. I was ready for the marathon! In 1978 I ran the Schultz Lite marathon in Montgomery Village on a blazing hot Labor Day. I was clueless…I ran with the half marathoners and was ecstatic when I got to 15 miles and was with the real runners! At 16 miles my body began failing bit by bit…every muscle took a turn cramping and walking was torture. I finished 3rd from last in 3:55. All the concessions were gone and few people were left. I swore I would never do that again. In 1979 I joined the Steeplechasers despite not having a clue how to run over hurdles and into water jumps. I came find out that they were just a bunch of friendly runners some of school were as slow as me. My knowledge of running distance went from a couple of things to volumes with a lot of on the road information. All the races and events were fun and there was a lot of camaraderie. Long runs became actually long and in 1980 I ran the Marine Corps Marathon in 3:35 and actually felt okay. It’s amazing what knowledgeable runners and real training can do.I also found a group that ran about the same times as me and we trained to break 20 in the 5 k and 40 in the 10 k. The thrill of making progress and reaching those goals was great. After 25 marathons I finally got my BQ in Pittsburgh in 1988 with a 2:56.27. Boston was an amazing experience and my 3:01 was just shy of requalifying but I was marathoned out at that point. My sister kept telling me that ultras were easier than marathons which made no sense to me. Again with help from the Steeps (Bob Imming) I learned to run trails which is still my favorite today. With a dozen 50 k under my belt I ran the JFK 50 when I turned 50 back in 2003. It was an experience but I wasn’t pleased with my 10:10 time. So the following April I did Bull Run. The 9:25 time was better but I decided I didn’t like to start a race when it was dark and finish in the dark! Nowadays races are fun events and adventures. I’m happy if there are still refreshments when I finish.
As a steeplechaser I have served as secretary, vice president, and a term as president. I have served on the board of directors since then and have been organizing the summer decathlon for the past 30 years. Needless to say, running and the Steeplechasers are an important part of my life.

Growing up in the suburbs of Detroit, Josh Roane dabbled in sports throughout school. He tried wrestling, football, and baseball, but nothing really caught on. Finally, at age 34, when he and his wife-to-be signed up for the Turkey Trot 5k in Purcellville, Virginia, he started his running legacy. After a few other 5k races, he met his first Steeplechaser at an 8k race in DC. Being introduced to the Steeplechasers led him to bigger and more challenging paths such as obstacle course racing and endurance trail running. Josh has completed Spartan races, zombie runs, several half marathons, and many variations in between. In 2018 Josh completed the RRCA Level I Coaching Certification with the hopes of teaching others about his passion for running. When not on the streets or trails, Josh enjoys hiking and traveling with his wife, Syble, and two kids, Andrew and Avery.