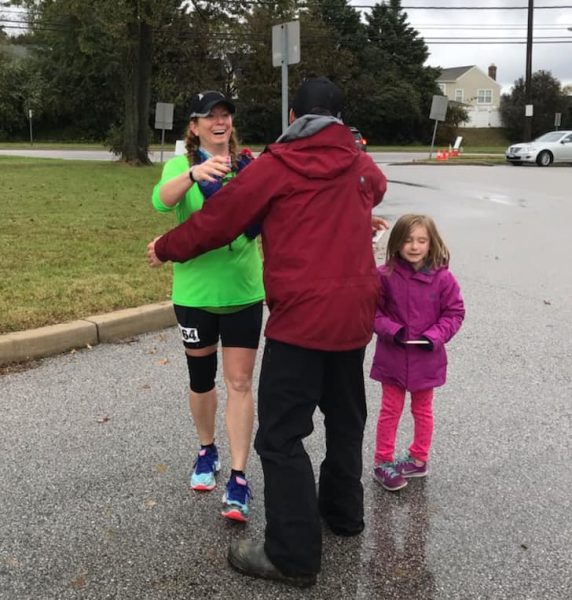 Patapsco Valley 50K on October 27 was not the trail race we all signed up and were hoping for. Late Thursday afternoon rumors were circulating that the race could be cancelled or might be moved due to the heavy rain that was headed our way for the weekend.  Mid-morning Friday, it was official, they were terribly disappointed to not be hosting the event on the trails due to State Park policy related to the amount of rain that fell in a 24-hour period.

The race directors still wanted the race to go on despite the weather and relocated it to the BWI Trail making it three 10.5-mile loops on the pavement.  When I read that I cringed, had a flood of emotions and panicked a little. This is not what I had trained for, I really did not want to do another long-distance race on the road, the weather was going to be cold and wet and oh, crap, I don’t have a good pair of road shoes to wear! I rushed out to get shoes, took them for a quick spin and kept hearing one of the golden rules ringing in my head, nothing new on race day! At this point I didn’t have much of a choice.

There was lots of chatter between the ladies I had been training with, friends and other runners about this change. My panic started to settle down Friday evening and I thought it is what it is, and I will give it my best shot. I have done too much training to keep me from reaching my goal of running my first 50K trail or not.

Race morning I was full of jitters and excitement. I received last minute advice and thoughts from the veterans and thought to myself, “Oh, what did I get myself into!” Once we started I was thankful that the race still took place despite the course.

From the start, one thing I wanted to make sure of is that I stayed on top of my fuel and hydration. Billy Clem’s advice was in my head, “EAT, EAT, EAT,” which I made sure I did the entire race, every half hour.At the beginning, the path had an overlook of the airport, which was a view you don’t see every day. Most of the path was fairly flat with a few hills. One stretch had planes taking off pretty much over your head, the first time scared me but was also pretty cool.

The aid stations were great, especially the warm food. The quesadillas and perogies were my favorite. The wet and cold conditions were not ideal but also brought out the best in people. Along the way, I received and gave encouragement. Total strangers exchanging small chit chat and sharing experiences. I helped a few struggling,but thankful runners by sharing my salt tabs. When I was changing my socks, several asked if I was ok with true concern. Those moments are only a few reasons why I love the running community.

When coming in to start my third loop, I saw Jeff and Tina who came to cheer me on.At that point I was starting to feel a little tired but seeing them, and getting hugs and smiles gave me the jolt I needed to head out for that last 10.5 miles. I then caught up to and recognized the pacer for my first half marathon years ago. We chatted and ran back and forth for a while. I needed this to pass the time,and it kept me going. I was ahead of her on a hill and heard cheering when I got to 26.3 to celebrate my longest run ever. About that same time, Nicole Davis passed by me and gave me a hug for my milestone. The last two miles seemed like they would never end, but I kept reminding myself one foot in front of the other. When I was coming up to the homestretch, I cried tears of joy that I had finished my first 50K. The RD was awesome, he hugged every runner who came in. The race was not what I had expected, but I’m so happy I ran it. I have already signed up for my next 50K!