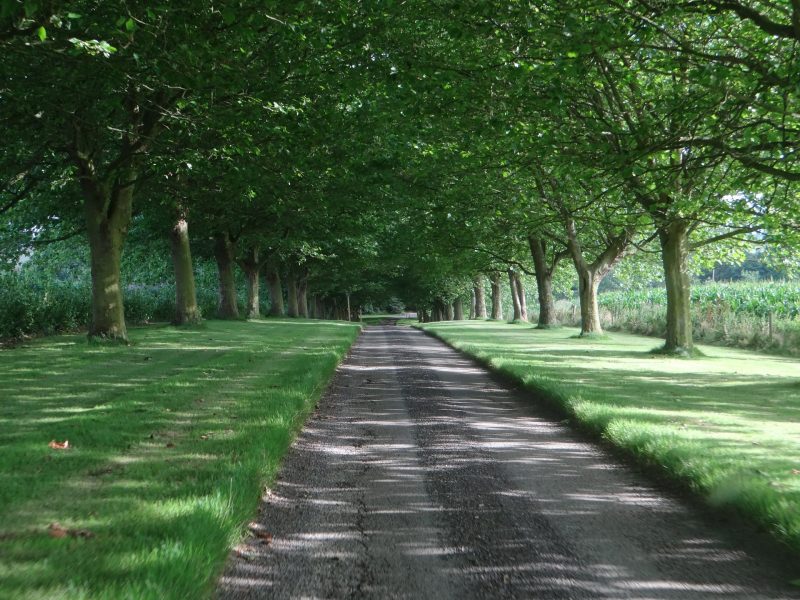 We all know the feeling of enjoying a summertime run in the Maryland humidity, when all of a sudden the heat hits hard and suddenly you wish it were February. To help prevent this from happening and ruining your summer running vibes, we sought the input from our members on sharing the shadiest road running routes in Frederick. And by shadiest, we mean tree-covered – not dangerous – of course!

This suggestion takes you on some of the shadier roads through some of the runner-friendly neighborhoods on the northeast side of Frederick: Dearbought and Worman’s Mill, while adding some tree-lined paved paths behind Rivermist Park off Gas House Pike.

From Gwyn Whieldon: “I’ve been enjoying doing (mostly) shady runs up on the trails near Gas House and Rivermist, something like this. It’s all paved trails or sidewalks, so I think that counts enough as “road” training!”

The Elmer Derr Out And Back

Great guidance here from Oksana Lightfield on this route directly south of the city: “Park at the Unitarian Universalist Church, it’s about 7 miles out and back going towards Mountville Road, but you can extend it going the other direction with less shade.”

The Hilly, Shady Route in Middletown

Another gem from Oksana Lightfield, which will take you on some gorgeous roads west of town, if you’re up for some hill training! “Park at Catoctin Center Nature Center in Middletown and run around country roads like Carol Boyer, Poffenbarger, Roy Schafer, Bennie’s Hill — lots of shade and also lots of elevation,” she shared.

The Myersville Tour From Main Street to Monument Road

A final route shared by Oksana Lightfield is a tour of Myersville’s scenic roads and climbs that also provides plenty of that gotta-have-it-in-summer shade. Oksana describes this one, saying, “Park at Doubs Park in Myersville and run up to Main St., follow all the way to cross Rt. 40, cross over to Easterday, left on Clavel (or continue on Easterday if more hilly miles needed), left on Pleasant Walk, cross Rt. 40 again, left on Grindstone, continue on Monument, get back to town by the VFD, back down hill to Doubs Park. One of my faves! Very shady, but also very hilly.”

You can drive (or run, if you’re REALLY into elevation gain) northwest out of town to the top of Gambrill Park Road and enjoy some mountaintop rolling hills as well as ample shade. You can park at the Tea Room and go north (per more guidance from Oksana) and enjoy “good elevation, some blind spots but shady.”

Aaron MacNab agrees: “During the summer I liked running Gambrill Park Road from the Tea Room out and back. It’s shady and the elevation makes it cooler. It has some hills which could be a good or bad thing.”

If you like flat, soft and shaded running, the C&O towpath is a tried-and-true option just south of town. There are several parking lots to choose from, and many are less than 30-minute drives from downtown Frederick. You’ll need to be OK with doing an out-and-back route, and cautious of high bike traffic on the path (especially in the summer), but running on the C&O is virtually all shaded with occasional river views. So many Steeps have recommended the C&O towpath as a great shaded route, and it also works for tempo runs due to its flatness and when you want a route you don’t have to think about. Folks call it “nature’s treadmill” for a reason!

The Alternatives: Staying Cool From Home & Hitting The Trails

We understand that right now, you may not want to drive somewhere just to run, you might prefer not to share a crowded path with others, or want to do what you can with what you have near home. So, here are some tips for staying cool while running, no matter the route, courtesy Lindsey Westcott:

Finally, many Steeplechasers already know of a virtually effortless way to find a shady running route: Hit the trails! Here are some trail options that aren’t too rugged:

Do you have other routes to share or want to see the rest of the Steeps’ shady route recommendations? Let us know! Click here to visit our Facebook Group post or email intervalsblog@steeplechasers.org with your favorite tree-lined routes.