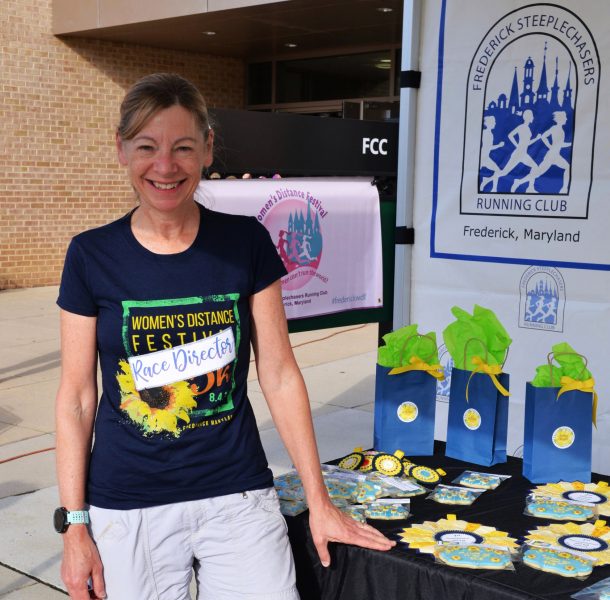 This person does so much for the club and has held several volunteer positions. I do have to add she makes amazing specially decorated cookies! She is very active with the Frederick Women’s Distance Festival and just presented a check for

to the Women’s Giving Circle of Frederick County, representing the net proceeds from this year’s race. This week’s amazing member spotlight is on Harriet Langlois.

“I was never a runner in high school/college, but in my early twenties, I was looking around for a way to build fitness so that I could keep up with my stronger friends on hiking trips. I decided to try running. This was the late 70’s and there wasn’t a lot of information out there about running. And recreational women’s running didn’t seem to be much of a thing. If there were running clubs, I’d certainly never heard about them. I bought a book and a pair of Brooks running shoes and started doing laps around Green Lake in Seattle.

When I became pregnant with my daughter, I sewed my own maternity running shorts because nothing like that existed in the stores! I loved the feeling of being out there pushing myself, alone with my thoughts (and a whole lot of rain).

About four years later, now living in Boston, an incident in the early-morning hours along the Charles River convinced me that running alone in an urban area wasn’t particularly safe for a woman. With two small children and a full-time career with a commute, I didn’t have a lot of other options. Discouragement and time constraints led to a 10-year hiatus while I focused on work and family.

In 1996, I replaced my running shoes and started running around Frederick. My dog, Brandy, was my faithful running buddy and my early-morning runs in the dark no longer scared me as long as I had her by my side. I kept at it, entered a few races, and attempted the marathon distance. Disappointingly, I was thwarted by stress fractures during my first two training attempts. I kept running, but cut back my mileage, convinced that I wasn’t capable of more than 5-10 miles.

In 2005, I tried one more time and made it to the start (and finish!) line of the old Frederick Marathon. That was a transformational accomplishment for me! Encouraged, I did a few more marathons and embarked on the 50-state journey.

I’m not sure that my husband, Lou King, and I will finish all 50 states, but it’s really about the fun of pursuing the goal, and we have loved the travel.

Brandy is long gone, but now I have Lou!

In 2008, Lou and I ran into a talkative guy named Mark Lawrence at a bar (go figure!) and he welcomed us to the Frederick Steeplechasers Running Club. For the first few years we pretty much just went to happy hours with the club since our work schedule didn’t really lend itself to group runs, and in 2011 we started volunteering. And volunteering some more. And we found a home for meeting some pretty wonderful people and the volunteer opportunities fueled our desire to give back to the community.

I have cycled through a number of roles with the club, including social committee lead and club treasurer, but I feel that I have really found a home working on FSRC races. I love that our races serve both the running community and the wider Frederick community through our donations of proceeds to charitable causes.

I have learned a lot about nonprofit operation with FSRC, and I’m pretty impressed by the effectiveness of this organization and the engagement that we have with our members and the wider community. Whether you join to simply take advantage of free and discounted races (which is just fine!), or you are looking to meet up with other runners in person or virtually, or you want to find an outlet for your desire to volunteer, membership in FSRC is a great deal.