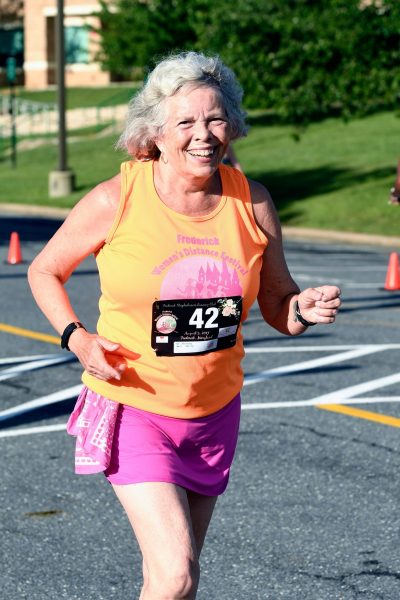 I would love to share your stories, accomplishments or anything else you would like to share, please send them to barb.meely@steeplechasers.org. This week’s amazing member spotlight is on Allie Young.

“My running days probably started around 1979.

We were living in Chula Vista and my husband, Bob, started running a mile every morning for PT. I joined him. I was very proud of my mile. Until we were stationed at Fort Clayton, Panama, in 1982.

The ladies were running from 3-10 miles. A few ladies were training for a marathon. And I upped my mileage.

This was before online shopping and running gear for women was limited.

In Panama, I ran fun runs, a 24 hour marathon, the Transisthmian Relay Race and other running adventures.

In 1990, while living in Northern Virginia, I trained for my first marathon – the Marine Corp Marathon. I did a few Cherry Blossom runs and Army ten-milers.

That was quite an adventure. My last marathon was in 2002. For a while, I just did running around the neighborhood.

Then Bob was diagnosed with cancer in 2007. He told me to keep running, keep exercising. I basically put my life on hold.

I gained 40 pounds and did nothing, absolutely nothing. It was three years before I woke up.

In June, 2010, I signed up for the Hershey Half marathon. And I started running again. Actually, it was more of a waddle.

In October, I did the Hershey half and I finished. And I haven’t stopped running since.

I have tried to do at least two half marathons a year. I started doing local races. And I found the Frederick Steeplechasers Running Club.

I have made good friends through the Women’s Distance Festival training runs. The WDF coaches at the time, Syble, Cassi and Martha, have been wonderful. They made running in the heat a lot more fun.

By the way, while looking back through my running archives:

And I was one of the slowest, even way back when. Oh, to be that slow again!”