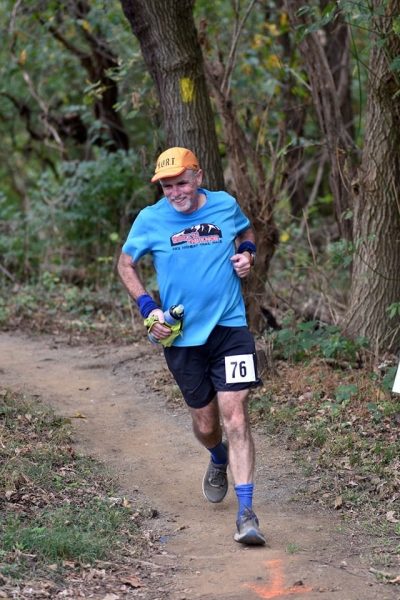 By the time I reached my early 40s, I was overweight, out of shape, and overall, I did not feel healthy. I knew what was wrong, I had been down this road before, but living a healthy lifestyle never stuck.

I finally made an appointment for a checkup and my doctor wanted to put me on medication for high cholesterol. Being the smart aleck that I’ve been known to be, I told him I wasn’t paying for his BMW. He calmly replied, “I’ll see you in six weeks. There better be an improvement”.

I set off, determined that I was not living my life on pills. I changed my diet and started running on a treadmill. Deciding I didn’t like the treadmill, I bought a surveyor’s wheel and measured the perimeter of my property determining that five laps were about one mile.

After a week or so of counting laps, I got bored and took off down my driveway and down the road.

After another run or two, I accomplished that goal and the five-mile round trip became my routine run.

Six weeks later, I’m back in my doctor’s office, 22 pounds lighter and my overall cholesterol was down from 299 to 151. With a stunned look on his face, he said, “I’m impressed. Keep it up”.

Every visit after that until he retired, his first question was always, ”You’re still running, aren’t you?”

Prior to this I always thought that these races were strictly for the elite athletes of the world. Realizing that I, too, could participate, I decided to concentrate on 5Ks, maybe an occasional 10K, but never a marathon because, in my mind, you had to be able to run the distance three times a week and I didn’t have time for that kind of training.

Several years later, while standing at the starting line for my first 100-miler, I nearly laughed out loud when the thought popped into my head, “I don’t have time to run 100 miles three times a week”.

In July of 2005, I showed up at the Spirit of Gettysburg 5K totally shocked at what I saw. There were runners laying on the ground doing weird stretches, while others were running before the race started. I’m thinking, “Won’t they be too tired to run?”

A few days later Larry Key, who worked for the same company as I did and had also run Gettysburg, walked into my office and said, “I didn’t know you were a runner”.

We quickly became good friends with Larry becoming a running mentor to me.

He was always pushing me to go to the next level, “If I can do it, I know you can”.

The two things that stuck with me the most were the following. Number one, never let the weather dictate your training. To this day, if I decide to skip a run because it’s too cold or it’s raining, I feel guilty.

The other came during a conversation when we were talking about something I had read. Larry replied,

And I’ve been doing it my way ever since!

I quickly developed as a road runner to where I was running multiple marathons a year. I had only been running for about 2.5 years. During one of those years, I ran 12 marathons and in the 21 weeks that followed, I ran 10. On the plus side, my longest training run during that period was eight miles.

I guess even then, endurance played a big role in my running. I’ve gone on to run over 60 marathons including Boston, which I ran twice. There’s no better way to see an area than one step at a time.

Larry was also the one who talked to me about joining the Steeplechasers.

The Grand Prix and Summer Decathlon allowed me to compete on a level that I had never considered in the past. I was also a member of the race team for the first two years of its existence.

I initially became involved in volunteering with the Steeps when Mark Lawrence approached me about taking over the race calendar. I then started helping Rich Potter with the web page and eventually doing more of it when Rich became involved in other activities. I continued this until someone finally took over who knew what they were doing. Thanks, Lou King! Lately, I mostly help Mark with finish line duties.

In the spring of 2007, Larry strikes again and I find myself in the Frederick Watershed.

Not doing as well as I had hoped to that first year, I was determined to do better the next and, while I did, I still wasn’t satisfied. The third year was the charm, breaking the six-hour mark (5:49) and finishing 6th overall.

Falling in love with trail running, I learned to run trails by running with those that knew more than I ever hoped to know such as Mark Lawrence, Mike O’Grady, and Bill Susa to name a few of many.

I’ve gone on to complete countless ultras, ranging from 50K up to 100 miles including completing the Beast Series in the Blue Ridge Mountains near Lynchburg, VA.

The Beast Series consists of completing three 50Ks in late winter/early spring followed by the Grindstone 100 miler, Mountain Masochist 50+ miler and the Hellgate 100K++ (66.6 miles) during a 10-week period in the fall/early winter.

Watching runners find their way to the trails for the first time, accomplishing goals they never dreamed they could complete.

As Anne Shubert has learned, if you come to me asking if I think you can accomplish something, I’ll tell you that you not only can accomplish it, you’re going to crush it! After all, if you are asking, then you have already convinced yourself that it’s something you want to try. That’s half of the battle.

I’ve been fortunate enough to win a few races (thanks to the fast guys for not showing up) and finished well in others but when asked about my proudest accomplishment as a runner I have to say it was when two-time CAT50K champion, Kristin Shaw, introduced me to a friend and told him,

It’s nice to accomplish your own goals but when someone whose talent far exceeds your own pays you a compliment like that suddenly it all truly does have a purpose.

While personal accomplishments are nice, it’s really about all of the great people I’ve met along the journey. The Frederick Steeplechasers have afforded me that opportunity more so than any other group I’ve ever been a part of.

We would love to share your stories, accomplishments, or anything else. Please send them to Barb Meely at barb.meely@steeplechasers.org.