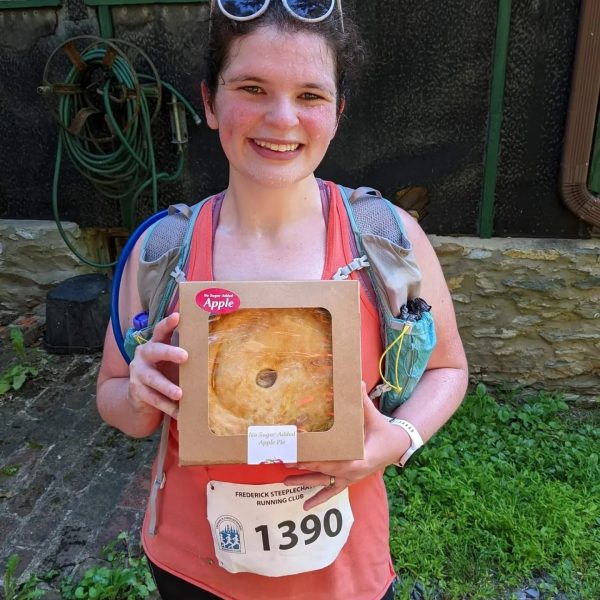 I am a fairly new member to the Steeplechasers, I joined in July of 2022. I began running in the spring of 2021 in an effort to lose some weight for my October 2021 wedding. I had never run before and was very skeptical about the idea, but had recently met some runners through social media and decided it was worth a shot.

Shortly after I began running, I signed up for my first 5K. Though the 5K was particularly grueling in the summer heat and sun, I had a blast and it helped boost my confidence that perhaps I could race in longer distances.

2022 kicked off with a bang, with me announcing to my friends and family that I wanted to run a half marathon. I was living in northern Virginia at the time, so D.C. races made the most sense, and after surveying my options, I selected Rock’n’Roll D.C. I trained by myself, on a treadmill, and my whole family came out to support me as I crossed the finish line less than a year after I had first started running.

I ran my second half marathon less than two months later, and by then I was hooked.

I signed up for my first marathon, the Baltimore Marathon. By the time I started training for the marathon, we had purchased our first home and were getting ready to move. I researched running clubs in the area we were moving to and found the Steeplechasers. I was excited to see that they had a marathon training group that would be starting right around the time of our move! I paid my membership dues and signed up for the training group right away.

I spent all last summer training to complete the marathon and was the final “official” finisher of the Baltimore Marathon! To this day it was one of the hardest things I’ve ever done, but one of my proudest accomplishments! I am looking forward to my second marathon later this year.

After my marathon, I continued running, and also began volunteering with the Steeplechasers at a few races. Ultimately, I decided that I wanted to volunteer on a more regular basis which led to me agreeing to become a regular writer and editor for the blog.

In addition to running the blog, I’m looking forward to volunteering at more races this year! I’ll also be running a few of my own races of course. My goal races for this year are the Frederick Half Marathon, Baltimore 10 Miler, and my 2nd marathon, the Richmond Marathon in the fall of 2023.

Have an idea or a person to highlight in our Member Spotlight series? Contact Barb at barb.meely@steeplechasers.org!