The Trail Series gives members who prefer dirt beneath their feet the opportunity for a little friendly competition against each other. The series includes distances from 5k to 50 miles.

There are no upcoming events.

For 2019, please see the Trail Challenge. This will replace the Trail Series.

Age-graded scoring allows runners of any age and any gender to be compared fairly against each other. If you are interested in the fine details, click here. The official age-grading calculator used by FSRC for the Trail Series can be found here.

Awards for the top 3 female and male winners are distributed at the FSRC Year-End Celebration Banquet. 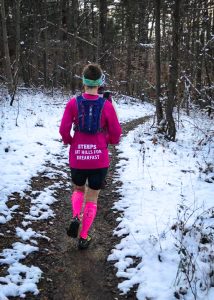